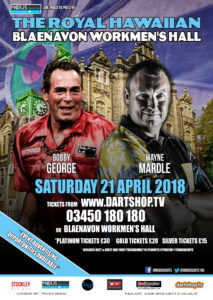 Exhibition Darts At The Workmen’s Hall

On Saturday 21st April 2018, Bobby George and Wayne Mardle, both legends in the world of darts, are coming to Blaenavon Workmen’s Hall.
The legendary Bobby George “The King Of Bling” will appear alongside charismatic pro-turned commentator and pundit Wayne Mardle.

Mardle ‘Hawaii 501’ also has an excellent professional record, reaching the semi-finals of the World Championship five times before opting to retire early and pursue a successful media career.

The pair are famous for their flamboyant and fun-loving stage presence as much as their excellent darting ability – and entertainment is guaranteed before a dart has even been thrown.
The pair will entertain the crowed with their trademark on stage antics during matches against lucky local players and a head-to-head showdown.