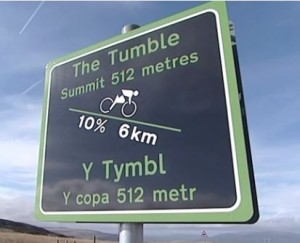 The velothon 2015 starts from Cardiff on June 14th.

The event covers 2 different routes of different distances – 50K & 140K.  It will be a closed road cycling event taking in some of the most beautiful views in South Wales. The routes are shown on an interactive map – click here for link to map.

It is estimated that there will be 15,000 cyclists on the day of the velothon so if you are a cyclist then join in and good luck. If you are a supporter, or just enjoy cycling, then check out the best pitch for watching the riders along the velothon route.

They will be cycling up the Keepers, Abergavenny Road – now referred to as ‘The Tumble’ – with a 10% gradient and then dropping into Blaenavon before returning to Cardiff.

As if it isn’t hard enough already, the velothon pro-cyclists will be climbing the Tumble twice.

The Tumble, as it Is now called, is a regular feature in the Abergavenny Festival of Cycling Iron Mountain Sportif and in 2014 hosted the finishing post for stage 3 of the Tour if Britain cycle race where the winner was Edoardo Zardiani (Ita/Bardiani CSF).

If you are in the area and would like to attempt the Tumble why not stay with us and relax before exerting yourself on this challenging climb.  NCN 492 leads to Blaenavon and can link to , NCN 465 Brynmawr to Crumlin and NCN 46 Abergavenny to Brynmawr and a lot more.  In general, there is a lot of good cycling around the area and we are only 30 minutes from Bike Park Wales – one of the UKs premier MTB destination.