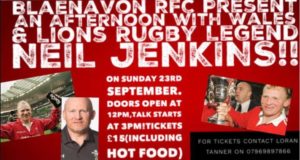 Spend an afternoon in the presence of a rugby legend – Neil Jenkins.
Sunday 23rd September 3:00pm

Neil Jenkins, MBE (born 8 July 1971) is a former rugby union player and current coach. He played fly-half, centre, or full back for Pontypridd, Cardiff, Celtic Warriors, Wales and the British and Irish Lions. Jenkins is Wales’ highest ever points-scorer and is the third highest on the List of leading Rugby union Test point scorers. He was the first player to score 1,000 points in international matches.

In 2004 Jenkins joined the coaching staff of the Wales national rugby union team and is the kicking skills coach.